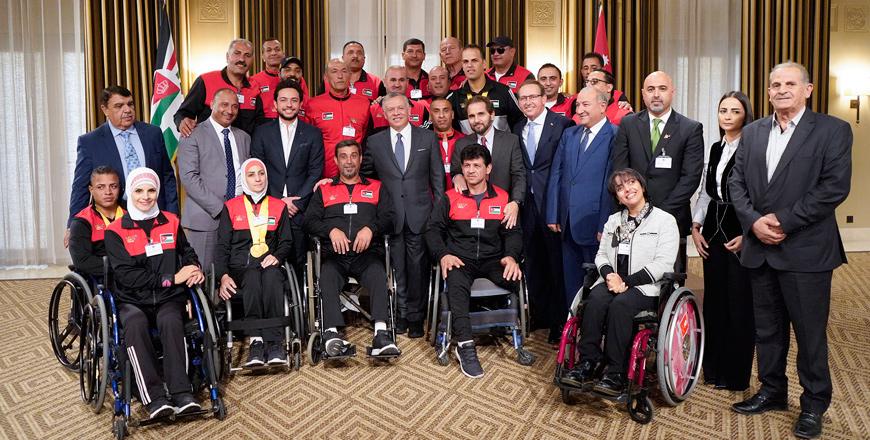 His Majesty King Abdullah meets with members of the Hashemite Commission for Soldiers with Disabilities team, which participated in the 2018 Invictus Games, on Thursday (Photo courtesy of Royal Court)

Amman — His Majesty King Abdullah on Thursday departed on a working visit to Washington, DC, during which His Majesty will be receiving the Templeton Prize in appreciation for his efforts to promote interfaith harmony, safeguard Jerusalem’s Islamic and Christian holy sites and protect religious freedom, a Royal Court statement said.

His Royal Highness Crown Prince Hussein was sworn in as Regent, in the presence of Cabinet members.

The Templeton Prize ceremony will be held on November 13 at the Washington National Cathedral to celebrate King Abdullah’s achievements, in the presence of around 600 political, religious, intellectual, academic and media figures.

His Majesty will deliver a speech at the ceremony, organised by the John Templeton Foundation, to highlight the importance of interfaith harmony and cooperation in countering hatred and extremism, and addressing misconceptions, according to the statement.

A number of international, intellectual and religious figures will also speak at the ceremony on the King’s effective role in spreading the values of tolerance and harmony, regionally and internationally, while also noting their importance in facing modern challenges.

The John Templeton Foundation announced His Majesty as this year’s Templeton Prize Laureate in a recorded video by its president. The announcement was acknowledged by the King in a recorded message, the statement added.

Templeton Dill said His Majesty is being awarded the prize in appreciation for his institutional initiatives in interfaith harmony and countering extremism, as well as his commitment to safeguarding Islamic and Christian holy sites in Jerusalem in line with the Hashemite Custodianship, efforts to protect freedom of worship in Jordan, as well as the Kingdom’s efforts to host millions of refugees.

The institutional initiatives launched and supported by His Majesty to promote inter- and intra-faith harmony include the Amman Message, which articulated a clear understanding of the central elements of Islam, and affirmed that terrorism and violence have no place in the religion.

Other initiatives cited by the John Templeton Foundation include the King’s efforts to restore and develop the Baptism Site of Jesus Christ, also known as Bethany beyond the Jordan, which UNESCO unanimously approved as a World Heritage Site in 2015, the statement added.

Established 1972 by the late global investor and philanthropist Sir John Templeton, the prize honours a person who has made an exceptional contribution to affirming life’s spiritual dimension, whether through insight, discovery or practical works.

This is the first time the prize is given to a political leader and head of state, and the second time it recognises a Muslim figure.

Since its launch, the prize has been awarded to 47 international figures, including scholars, philosophers, and leading reformers, such as Mother Teresa, who received the inaugural award in 1973, the Dalai Lama (2012), and Archbishop Desmond Tutu (2013).