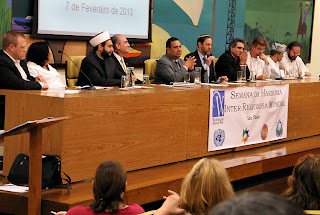 World Interfaith Harmony Week was celebrated on Thursday 7 of February at the City Chamber of São Paulo thanks to the support of city Councilor Gilberto Natalini and the partnership of the interfaith leaders.

Reverend Christian Lepelletier, UPF Vice-President was the MC and invited the following religious representatives at the main table from left:
Disciple Robson Dias from the Makadesh Evangelical Community,
Professor Sandra Santos, President of the São Paulo State Umbandist Association,
Sheikh Mohamed Al Bukai, Director of the Islamic Affairs of the National Union of the Islamic Organizations in Brazil,
Simão Ferabolli, President of the Family Federation for World Peace and Unification (FFWPU), representing the Universal Peace Federation (UPF),
Professor Samuel, President of the Brazilian Association of Religious Freedom and Citizenship representing the Adventist Church,
Rabi Gilberto Venturas representing the Paulista IsraelitaAssociation,
Bishop Marcelo Resende from the Liberal Catholic Church and the Theosophical Society,
Reverend Mahesvara, representing the Hinduism and the Hare Krishna Movement,
Ifa Boala representing the Yoluba African Traditional Culture,
Pastor Nello Pulcinelli, from the Institute Thomas Helwys representing the Baptist Faith and
Father Kyrilos Carlos from the Byelorussian Slav Orthodox Church who arrived after the picture was taken.
Among the dignitaries present were: City councilor Gilberto Natalini who said: “Religions can play an important role in reducing violence, a major problem in our megalopolis. In a city like São Paulo, a culture of peace, it is a necessity. And all religions are fundamental to promote a culture of peace. “
City Councilor Laercio Benko said: “It is very important to promote Interfaith Harmony, even though in Brazil, most religious followers are free to practice their faith, I personally met intolerance because I belong to the Umbanda Afro Brazilian tradition that receive persecutions from fundamentalist Evangelicals. I will offer the full support of my office for the sake of Interreligious harmony.”
About sixty people came, among them several leaders from the Civil Society including the Paulistanos Movement  for Peace that started to meet at the city Chamber following recent  waves of violence and twenty members of the FFWPU youth group.
Professor Samuel coordinated the table and asked each leader to answer the following questions: As a religious leader or follower of a religious movement (religion) how can you support the city Councilors to build a Culture of Peace? Would you be willing to cooperate with other religious leaders and join an interreligious Council to support the city Councilors of São Paulo to build a Culture of Peace?
The general response was positive thanks to the good partnership already existing between some councilors and the interfaith leaders. Everyone understands that the Culture of Peace is rooted in spiritual and moral development and that is the main responsibility of the religious leaders to provide education to their members.
Selma Tristão from the Hebrews Evangelical community presented a beautiful song for a brief interval. Then a UPF video was presented on the screen to introduce the worldwide scope of the activities.
Finally, Simão Ferabolli presented the Interreligious Councils proposal that originated from the UPF founder reverend Sun Myung Moon when he spoke at the UN in 2000. That vision should be extended in order to provide religious leaders for the UN Council, each nation should establish an Interreligious Council and to elect religious leaders for the national Council, each states and even each city should establish an Interreligious Council.
With the Paulistanos Peace Movement which includes several interfaith activists meeting every first Thursday of the month at the City Chamber already we are building a foundation for the future São Paulo Interreligious Council.
SOURCE