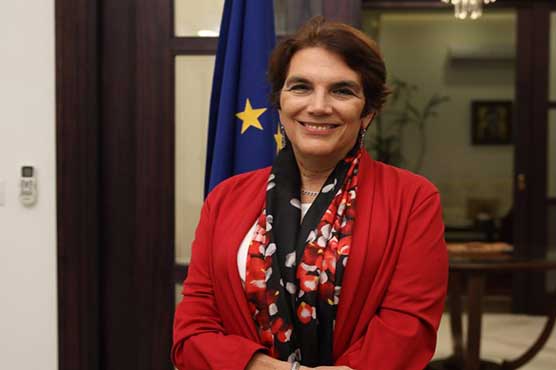 The EU was celebrating the World Interfaith Harmony Week with an aim to found all possible common grounds for religious and social harmony, and its contemporary significance among the people having different religions and cultural values, she said.

The ambassador said in today’s increasingly complex political and economic world, beset with conflict and intolerance, peaceful coexistence among various religious beliefs was critical for achieving peace and prosperity.

She said it was more pressing and imperative to address and tackle the global problems such as COVID-19 pandemic with global responses and joint efforts.

“This requires commitment from all concerned. We must spread the message of compassion and embrace our diversity, based on our common humanity.”

“It recognises the imperative need for dialogue among different faiths and religions to enhance mutual understanding, harmony and cooperation among people,” she added.

“Pakistan is a signatory of the International Covenant on Civil and Political Rights (ICCPR), a multilateral treaty adopted by UN General Assembly which entered into force here in 2010. The covenant commits its parties to respect the civil and political rights of individuals, including the right to freedom of religion. The ICCPR is also one of the conventions that is referred to in the GSP+ trade regime, which the EU and Pakistan have signed and which entered into force in 2014,” she added.

Androulla Kaminara said the EU believed in the freedom of religion or belief – which was enshrined in Article 9 of the European Convention on Human Rights and Article 18 of the Universal Declaration of Human Rights that ensured and protected the right of individuals to practise the religion or belief of their choice – and therefore their dignity.

“Therefore, the EU is supporting initiatives promoting interfaith dialogue,” she added.
The ambassador said interfaith dialogue was one of the priority areas of the Strategic Engagement Plan (SEP) signed between the EU and Pakistan in 2019.

Both the EU and Pakistan, she added, had agreed to work towards “enhancing intercultural and inter-faith dialogue and understanding to promote tolerance and harmony, in particular mutually beneficial exchange of knowledge, people-to-people contacts and education.”