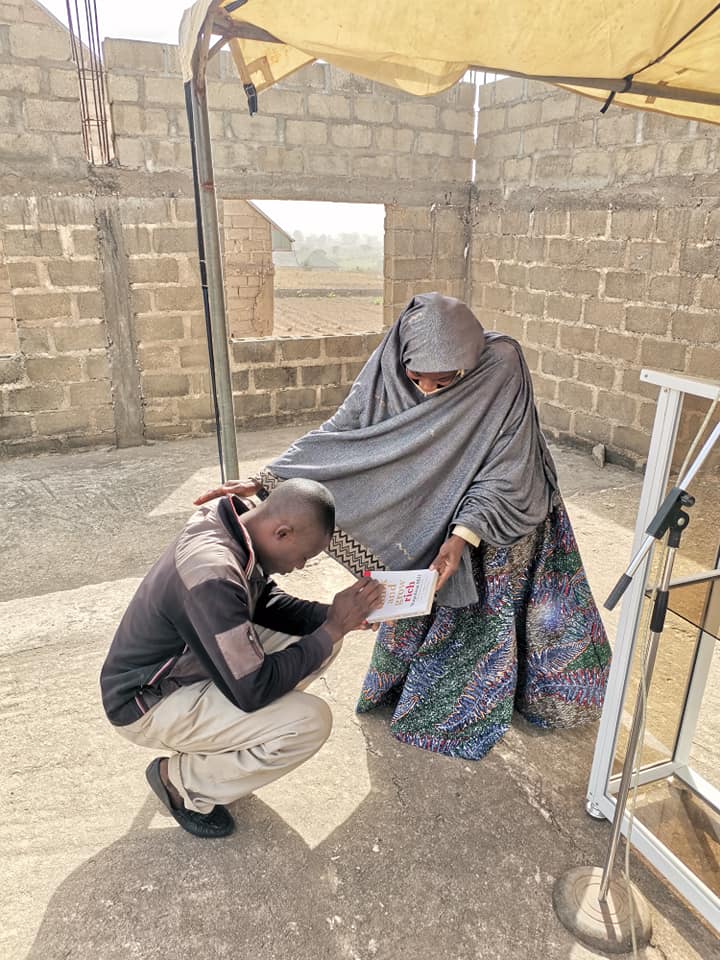 Country: Nigeria
City: kaduna
As the world commences celebrations of United nation (world international interfaith week and Harmony 2022) , A Nigerian peace ambassador and also an international- interfaith specialist from northern Nigeria , Hajiya Ramatu Tijjani , a muslim woman has visited the church of Christ evangelical and life intervention ministry sabon Tasha kaduna south with the aims of donating series of gifts to church workers which include The best chorister in the band, children choir,best pastor and intercessory women of the ministry . "Forgiveness, tolerance, peace,love, and unity among all the tribes and languages in Nigeria is what we needed" According to her ,the aims of the international harmony week is to strengthen good inter-faith relations, increase awareness of different and distinct faith communities and increase better understanding between people of religious and non-religious belief all over the world. (she donated these motivational books to the winners to sthrenthening interreligious tolerance and better understanding among different faith base organization in the country) Recognizing the imperative need for dialogue among different faiths and religions to enhance mutual understanding, harmony and cooperation among people, Hajiya Ramatu says, the week which start from 1st-7th February provide a golden opportunity for people of different faith to promote religious tolerance in order to live in peace and harmony The Theme of this year 2022 (Faith and spiritual leadership to combat stigma and conflict during pandemic recovery) Adding that the General Assembly of United nation encourages all States to spread the message of interfaith harmony and goodwill in the world’s churches, mosques, synagogues, temples and other places of worship during that week, on a voluntary basis and according to their own religious traditions or convictions. She said, she choices to donate gifts to these church workers because of the commitment they do and other services Ramatu Pray for Nigerian arm forces toward the success of all their peace mission all over the world while calling on government to support the security with all that is needed to tackle Terrorism,Banditry,kidnapping that is affecting education,peace stability in the country The peace ambassador says, she is going to used the week through taking many peace Campaign to mosques,markets,train and railway station and meet with many youth clubs in the communities Responding pastor yohanna buru, who is the general over seer of the church expressed appreciation to her, while emphasizing that this is not the first time ,she is coming to the church and donating many things to the orphans and widows of the church. The Christian cleric says, the church cannot forget the free donation of Holy Books and other study materials she did some times back Buru ended by saying , World Interfaith Harmony Week (WIHW), conceived to promote a culture peace and nonviolence, was first proposed by King Abdullah II of Jordan at the United Nations in 2010 While stressing that he has mobilizes over 100,000 Christian and muslims clerics with traditional believers through different media organization which include Television, Radio, and news papers and also on social network to support the country with prayers ,for God to bring an end to the fight against Banditry,terrorism,kidnapping,cattle rustling, and ethno-religious political killing that is causing serious problems in the northern part of the country church from north western Nigeria mark its 10 years of anniversary through using its monthly meeting, Campaign, dialogues , round table -talk , school debate ,quiz competitions, street- shows, advocacy programs , endurance trekking, consultation with various religious groups in the country ,with the aims of promoting peaceful co-existence and interreligious Tolerance among different faith base organization across the 19 northern states of Nigeria , (the church mark its 10th years of organizing its monthly interfaith activities to strengthen Christians-muslims relations for peace and unity from January to December every year) He said the church has line up many activities to promote interfaith week through its monthly meeting with various stake holders on peace building in the state and the entire northern Nigeria Some part of the annual church activities to mark interfaith week and harmony every year include Using Football games, Cyclize , Marathon, staking games to enhance peace stability among youth and women,while the church uses weekly 30 minutes Radio and Television programmed to educate and sensitizes millions of listeners on the importance of peace and Tolerance among different faith base organization to live in peace and harmony with one another