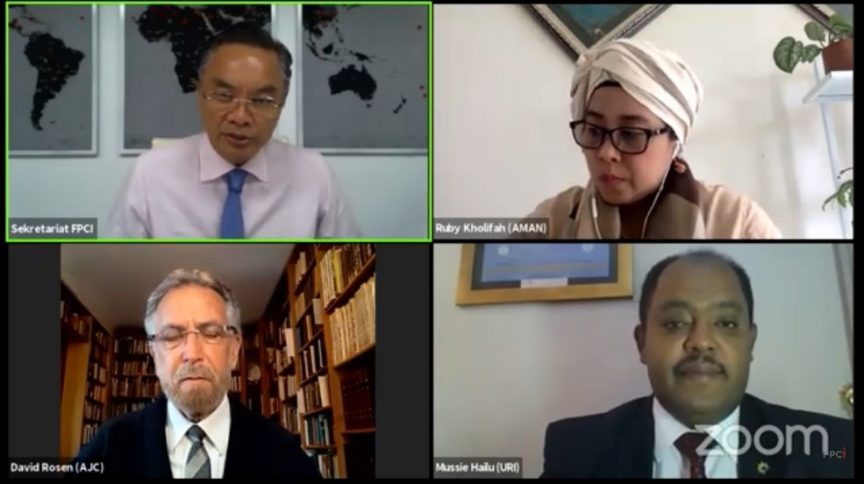 The 1000 Abrahamic Circles Project is an organization focusing on interfaith dialogue between three Abrahamic religions, Judaism, Christian, and Islam. Our main project is a circle program, where each religious leader met to spend a week in each of their communities, learning the religious values of one community to others. But the program has been temporarily halted due to the COVID-19 Pandemic, forcing us to create a creative way to spread the interfaith peace message.  Thus, to commemorate the World Interfaith Week, we conduct an interfaith webinar to discuss the Strategic Approach towards Achieving Inter-Religious Peace.

The webinar was conducted on 28 January 2021, collaborating with the United Religious Initiative (URI) to bring together three different nationalities and religions for the 2021 inter-religious peace. Those three people are Rabbi David Rosen from the American Jewish Committee, Dwi Ruby Kholifah from the Asian Muslim Action Network (AMAN), and H.E. Mussie Hailu as the URI representative at the UN and African Union, moderated by Dr. Dino Patti Djalal as the founder of 1000 Abrahamic Circles Project.

It was filled with the discussion of various challenges and strategies we should work on to achieve inter-religious peace in 2021. Rabbi David points out that “today there’s never ever been more interreligious collaborations, cooperations, mutual respects, knowledge, than ever before in human history.” when he was asked about the rising inter-religious tension in 2020. He also stated that the impressions of the rising inter-religious tension are due to the fact that the negative news gets much more coverage than the good ones.  The marginal extremist bigots who were unheard before the age of social media are becoming easier and easier to gain access and spread their hate messages. Thus, we should be proactive and spread the peace message to reduce the impact of those negative forces.

In the meantime, Ms. Ruby stated that apart from inter-religious conflicts, there is also an intra-religious conflict where the people from the same religious community are fighting over different ideologies and knowledge. She explains that once there was a person who followed him and said that he wanted to preach to her because the way she wears the hijab is wrong. This mindset would be complicated, especially due to the fact that Islam has multi interpretations of its religious teaching. There are different Islamic schools of thoughts, and therefore there is no single truth. She also explains that in the case of Indonesia, the use of religion as a political commodity is harming the people, especially in Jakarta's 2017 election. The negative impact of the election has made people segregated even today, thus the Indonesian should find a way to reconcile with one another. She also says that “this is very much a timing to revisit the way we understand our diversity, our pluralism, and multiculturalism, our people really understand about why and what is being multiculturalism. And why Indonesia was founded as Indonesia and consisted of different religions and also cultures.”

Other than that, the discussion has also talked about the impact of economic hardship on religiosity. Ms. Ruby stated that the economic hardship has increased the culture of empathy among the inter-religious community. Rabbi David also has the same thought where he noticed that there is a multi-religious humanitarian fund when the pandemic broke out. The funds are contributed by different religions and established to deal with the needs of people around the world instead of their own communities.

Dr. Dino has also asked about the prospect of for the very first time, achieving a century where all Muslims, Jews, and Christians live peacefully globally. David Rabbi argues that the question will not only talk about the three religions mentioned above, but also the humanity itself. We live in a brutal world where it is hard to live peacefully globally. However, there are some eras where the collaboration of Jews, Muslims, and Christians can uphold civilization such as the era of Spain Andalusia. Such an era could exist when each religious community has an understanding and trust between one another, that is also one of the reasons why we conduct an interfaith dialogue. Meanwhile, Ms. Ruby gave a point of view as an Indonesian with its diversity and multiculturalism. She states that the government needs to make legal protection for all people with any religious identity. Other than that, she also highlights the importance of the school to teach the young generation about interfaith solidarity.

The discussion ended with the questions and answers session, where there are various questions about the problem of inter-religious peace in various locations. The questions mainly came from university students, academics, and professionals. We believe the inter-faith peace goals would only be achieved with the efforts of all social levels, ranging from the grassroots activist to the elites. World Interfaith Week would make it easy for all of the people to share the spirit of inter-religious peace, regardless of their social levels and conditions. The week would unite us all in the spirit of multi-religious solidarity. Therefore, jumping from the professional’s environment, we also organized a webinar with school students on 5 February.