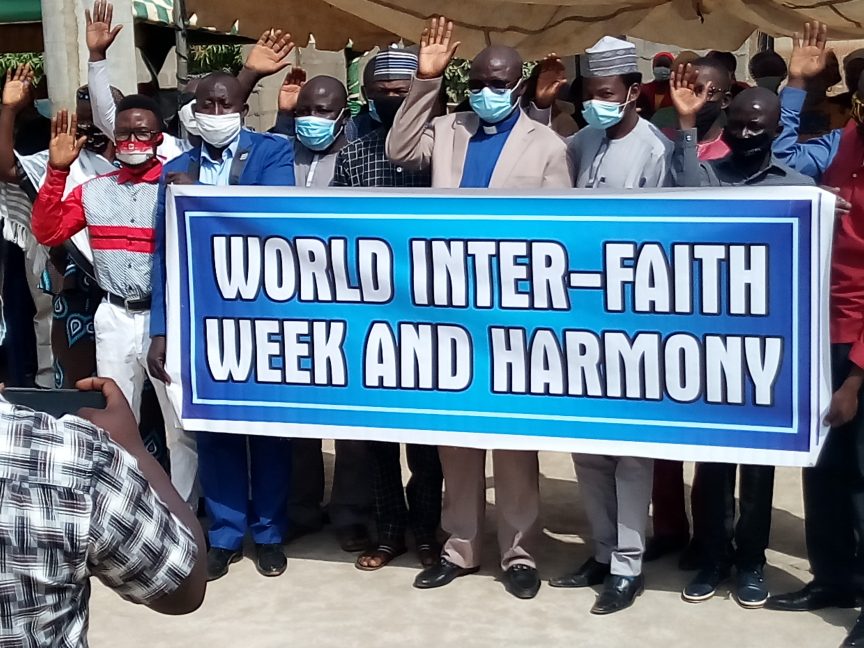 As the world commences  United- nation World international interfaith week and harmony  which usually start from First week of February every year 1st-7th  ,and the essence is to promote harmony between all people regardless of their faith ,tribe, culture ,ethnicity ,race, color ,height ,region or continent,
A Christians cleric pastor yohanna buru, the general over seer of Christ evangelical and life intervention ministry sabon tasha kaduna state north western Nigeria has invited some Muslim  scholars to the church ,  which is aimed at calling for One hundred thousands of  Muslims and Christians scholars  across 36 states of Nigeria to used the interfaith week and harmony to offer special  prayers and fasting  for peace stability in the country ,
According to him, This is also to strengthening  the Nigerian military and police , para-military ,civilian JTF and Vigilantes  to over the activities related insecurity challenges which includes Terrorism ,Arm banditry, Kidnapping ,Arm-robbery , Cattles rustling ETC .
Buru pointed that , the interfaith week provide Golding  opportunity for Christians and muslims with other religious and traditional  leaders to meet - interact and deliberate on issues related to religious Tolerance, better understanding, peace building and new ways of  empowering  communities and groups different  skills  to resist activities related to violent extremism, gansterism ,Cultism and other unlawful act that affect peace stability on the country,
The cleric said, they are going to uses Radio, Television, newspapers  and social media to mobilizes  more Christians-Muslims scholars to used the week by United Nation with the aims of enlightening different faith base organization on the need to sustained peace,love,unity and forgiveness.
“Our targets is to communicate with 50,000 muslims-50,000 christians through the media to used the week in spreading the message of peace,Love,forgiveness”
" we are going to pray for peace and harmony in the country"
The  world Interfaith Harmony Week is a UN resolution for a world-wide week of interfaith harmony proposed in 2010 by King Abdullah ll and prince Ghazi bin Muhammad of Jordan,
The week also recognizes  the moral imperatives of all religions, convictions, and beliefs call for peace, tolerance, and mutual understanding
Buru said, The called has become mandatory in view of the increase crisis which include farmer –herders clashes , ethno-religious political instability that has affected  all sector of human endeavors starting from economic setback, education, Tourism,
The one week prayers and fasting would help the country toward tackling most of problems associated ethnicity ,and religious impediment .,
We are taking the Campaign to all places of worships,social gathering,market places, schools,Hotel, Car-park,football view centers, Temples,football stadiums,internally displaced people IDPs, traditional wrestling center and to all media house including the on-line.
“we have sent message to all our friends Muslims and Christians clerics to dedicate more time in praying for the country and world at large”
“We want to called on all clerics  to offer special prayers at night and fasting for God to bring an end to the insecurity challenges”
“we want to used this week in praying To almighty God to bring an end to the increasing number of CoVid 19 infections  and daily death that is threatening the existence of human being”
Buru said,,The week provide many opportunities for people across the universes  to meet and deliberate on ways to better understand themselves  on how to live with one another irrespective of his tribe, religion, ethnicity,color,race country\
Nigerian been tag as the most religious country in the country in the world, there fore we must submit every thing to the hands of the lord
The Christians cleric says  they are going to take the campaigh to many place while maintaining social distancing to avoid the spread of Corona virus ,
Stressing that for the fast 8 years his organization has been organizing many event to mark interfaith week and harmony which include using games like football and skating competition between muslims and Christians to foster peace,
“despite the spread of Corona virus, we still have line up activities to mark this year interfaith week celebration with various groups and communities peace iniciative”
Mallam Gambo Abdullahi lead a delegation of some muslims to the church to strengthening good relationship with Christians
He said, there is need for all religious leaders to be more committed toward sensitizing the public on the importance of this  week to the entire people of the world
Adding also that the week is very importance most especially looking at Nigerian situation where there is always religious violence and ethinicity difference
It must be noted that the week promote mutual understanding and inter-religious dialogue
He then called on all faith-base organization,  Jama’atul nasril islam JNI , Christians association of Nigeria CAN and peace ambassador ,state and federal Government to used to the 7 days toward sensitizing the general public on the importance tolerating each other for peace stability
While calling on creation of peace clubs for young childrens in schools and communities,he equally appealed for wealthy individuals to be sponsoring friendly matches between muslims and Christians,
“we will take the campaign to mosques and to sensitizes the youth on interfaith week|