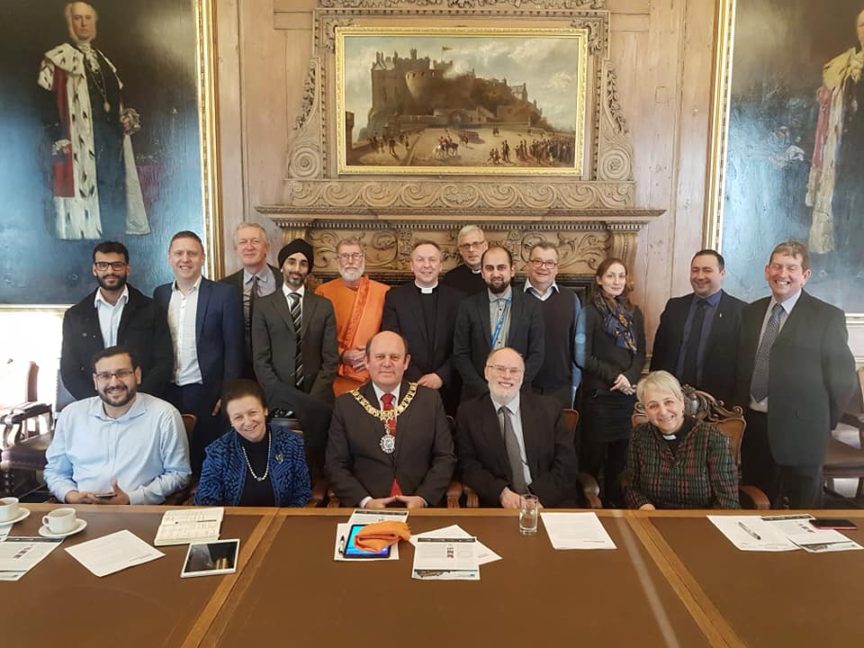 Country: United Kingdom
City: Edinburgh
Delegates from across the UK and Europe gathered together at a conference on Monday morning at the Edinburgh City Chambers where the Lord Provost, Right Honourable Lord Lieutenant and Lord Provost Frank Ross officially opened the, ‘Capital Cities Interfaith Network.’ This is a statement on behalf of the newly formed network. “Collectively as representatives from Capital City Interfaith networks we recognise that we share much in common and have much to gain through greater collaboration. Capital Cities are uniquely placed and face unique challenges. They are home to Parliaments, financial centres and some of the highest levels of religious and cultural diversity. Interfaith associations play vital and often unrecognised roles in promoting interfaith understanding and relations which help maintain strong, peaceful cohesive communities. Through greater collaboration we hope to establish a mutual exchange of learning and best practice and enable Capital City interfaith organisations to speak together with a clear unified voice on issues that matter to them. It is our hope that the network can build on already existing excellent work done by the capital interfaith associations towards peaceful, open, inclusive and cohesive societies. At the conference we were pleased to agree on a framework moving forward and for key priorities and activities for the network. We would like to take this opportunity to thank those from across the religious and political spectrum who have given encouragement to the network including Mairead McGuinness, First Vice President of the European Parliament, who have recognised the potential key role that the network can play in embracing and celebrating the increasing religious diversity of Europe.” Why is this such good news? The network brings together some very experienced interfaith organisations and practitioners. Already signed up to the network are Dublin City Interfaith Forum, Edinburgh Interfaith Association, Faiths Forum for London and South Cardiff Interfaith. We hope to welcome new associations from across Europe. The partners are committed to establishing a mutual exchange of learning and best practice. There will be joint collaboration between the organisations on 4 mutually agreed activities per year. The network will also speak on behalf of the capital city organisations on issues of key concern this could be from areas from climate change, brexit to the refugee crisis. With the vast experience and expertise contained within the networks we will be looking to engage with the state, authorities and public institutions offering consultation, guidance and training. For example, one key priority for the network is tackling religious hate crime. Dublin, Edinburgh and London organisations have experience of working closely with the Police and authorities on both consultancy and training capacities. Dublin currently provides training to faith community representatives on how to report and record hate crime. The Faiths Forum for London works in conjunction with the Mayor’s Office for Policing and Crime (MOPAC) to deliver workshops with young people aged 13-25 to respond to hate and extremism. While the Edinburgh Interfaith Association has previously been contracted to train officers and respond to 24 hour religiously related emergencies. As Capital City interfaith organisations we have often been called upon to respond in times of crisis such as to terrorist activity in order to maintain community relationships and cohesiveness. We have worked hard to prevent international conflicts linked to religion from threatening stability and will look apply to these lessons internationally and help countries across the board to be resistant to hate ideologies and learn to celebrate the contribution of countries rich cultural and religious diversity. We believe that faith communities are often the source of much good doing much work that goes unrecognised to help the most vulnerable in our societies from migrants, youth, senior citizens to the sick. We hope to build on that good work and look to unite faith communities behind issues of common concern. In establishing the framework for the network we can now begin to support and learn from one another to further our aims of building peaceful, open, inclusive and cohesive societies. We are all very much looking forward to our next conference in Dublin in late May early June which of course you are warmly welcome to attend to find out more about the network and its vision going forward.