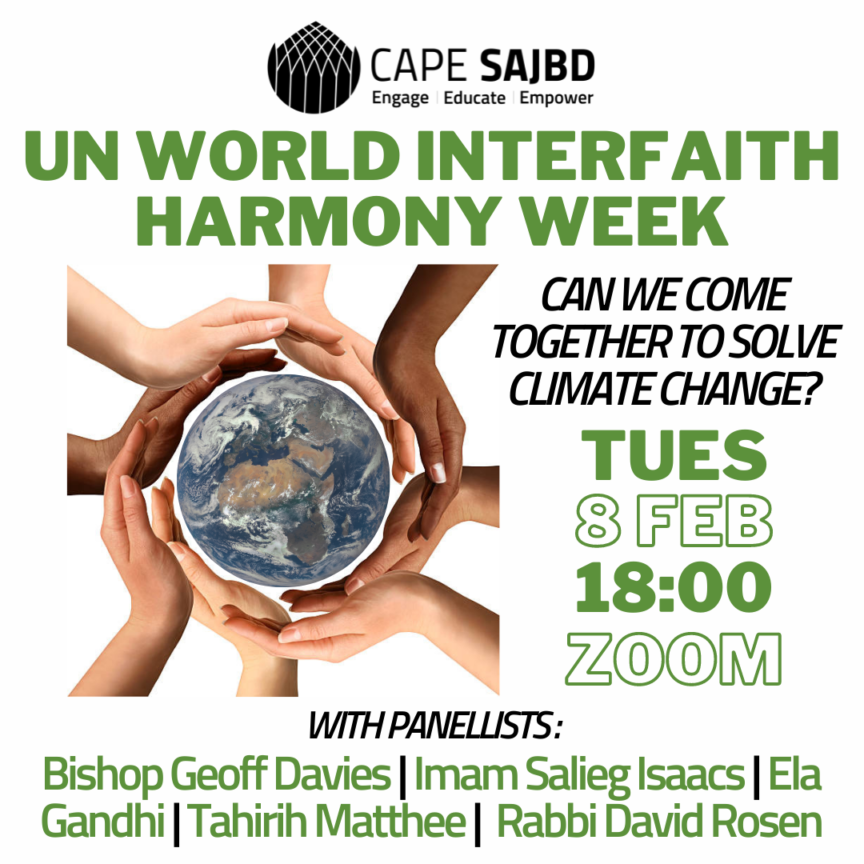 Join us in celebrating United Nations World Interfaith Harmony Week on Tuesday, 8 February 2022, from 18:00 to 19:30, as we discuss climate change and the role of interfaith harmony in shifting global mindset with speakers from the Baháʼi, Christian, Hindu, Jewish and Muslim faiths. Our speakers include: Bishop Geoff Davies, patron and founder of the Southern African Faith Communities’ Environment Institute (SAFCEI), inaugurated by Nobel Peace Prize winner Wangari Maathai, and has received the Archbishop of Canterbury’s Langton Award for Community Service. Imam Salieg Isaacs, a Manenberg community leader and activist, is a Director of SAFCEI and serves on the Cape Town Interfaith Initiative and the Muslim Judicial Council. Ela Gandhi, peace activist, a veteran of the uMkhonto we Sizwe and under house arrest for 9 years, former ANC MP, was the Chancellor of Durban University of Technology and chairs the Mahatma Gandhi Development Trust. She has received the Community of Christ International Peace Award, the Shanti Doot International Award from the World Peace Movement (India), and the Pravasi Bharatiya Samman and Padma Bhushan awards from the Government of India. Tahirih Matthee, the Interfaith Liaison and former Director of the Baha'i Office of Public Affairs (South Africa), a member of the International Environment Forum, served as Chairperson of Southern African Faith Communities Environmental Institute, on the Executive and Working Committee of the Western Cape Religious Leaders Forum, the Executive of the National Religious Association for Social Development and is a doctoral candidate at the Durban University of Technology. Rabbi David Rosen KSG CBE, American Jewish Committee's International Director of Interreligious Affairs, an International President of Religions for Peace, President of the International Council of Christians and Jews, and serves on the Board of Directors of King Abdullah of Saudi Arabia’s KAICIID Dialogue Center and the Board of the World Council of Religious Leaders. He has received the Archbishop of Canterbury’s Walter Award for Reconciliation and Interfaith cooperation.